Our Past Resonates in the Present

For centuries, the area’s geographic location has played an important role in its development. From native peoples to early Georgian settlers and Civil War legends to WWI troops, the spirit of resilience and service has defined our heritage.

Many attractions are related to the area’s rich history and bring people from all over the world to Catoosa County. Read on to learn more about Catoosa County and its cities of Ringgold and Fort Oglethorpe.

Officially formed in 1853, Catoosa County was named for nearby Catoosa Springs, which had begun to attract health seekers even before the area transitioned from Native American territory to part of the State of Georgia in 1831. Prior to European colonization, the area was first settled by the Creek Indians, followed by the Cherokee Indian tribe.

It is believed the word Catoosa is a Cherokee word meaning "up on the hill" or “between two hills.”

The first settlers of Catoosa County worked their way up from Dalton and Tunnel Hill and eventually north to the Tennessee line. From the outset, Catoosa was filled with entrepreneurs looking to make a mark through the establishment of railroads, mills, sundry stores and saloons.

During the Civil War, the area’s first brush with combat was the capture of the Andrews Raiders just north of Ringgold in 1862. A little later, Ringgold was turned into a Confederate hospital town. Hospitals were set up in the Courthouse, Inman House, Baptist Church, Catoosa Springs and Cherokee Springs, totaling about 2,000 hospital beds.

Things escalated in 1863 as the Union Army moved south from Chattanooga, searching for the Confederates. Several battles and skirmishes occurred throughout the region as the Confederates fought off the advancing Union forces. Western Catoosa County is the site of the Battle of Chickamauga, September 19-20, 1863, the bloodiest two-day battle of the Civil War. Catoosa saw the last of the Chattanooga Campaign and the first of the Atlanta Campaign. At one time there were 120,000 Union soldiers in Catoosa County complete with their wagons, cannon and mules.

The results of the war and the ensuing Reconstruction era limited development in the area until the construction of I-75 in 1960. While Catoosa County has four exits in about 3 miles of interstate, each exit is its own center of economic activity. I-75 also puts the area into close contact with Atlanta, Chattanooga, Nashville, Knoxville, and Birmingham. Traffic from Alabama and West Georgia from Highway 27 usually enters I-75 at Ringgold by way of Highway 151.

Recent archaeological discoveries indicate there has been a settlement in Ringgold as far back as 1000 B.C. Ringgold’s ideal location has made it an obvious choice for settlement for centuries: Ringgold Gap lines up with Mill Creek Gap in Dalton to provide the shortest distance from the Mississippi Valley to the East Coast.

Ringgold’s existence was then and still is based on its being a crossroads. The recently discovered prehistoric village persisted during the era of the Mound Builders. The Union Army reported a large mound about where the Alabama Road crosses I-75. Early maps referred to the village as Cross Roads, Taylor’s or sometimes Taylor’s Cross Roads.

The town was incorporated in December 1847 and named for Major Samuel Ringgold, the first regular army officer to be killed in the Mexican War. Ringgold was recognized as a national hero and died about 19 months before the town was organized. The arrival of the railroad in 1849 turned the sleepy crossroad village into a railroad boomtown complete with saloons, distilleries, stores and mills. Prospectors searched the county for precious minerals and entrepreneurs had a field day as the town grew to about 1,500 residents.

As the fighting in the Civil War raged in Kentucky and Tennessee, Ringgold was turned into a supply depot hospital town, receiving the wounded and shipping reinforcements by train. Two Confederate nurses, Kate Cummings and Fanny Bears, left vivid descriptions of conditions in the local hospitals during the war.

After the “Battle of Missionary Ridge,” the entire Confederate Army retreated through Ringgold Gap. Gen. Patrick Cleburne and his 4,000 men were given the task of delaying the Union army until the Confederates could reorganize at Tunnel Hill and Dalton. The Confederate Congress gave him a commendation for his gallant and successful stand at Ringgold Gap. Much of the Union Army spent the winter of 1863-64 camped in and around Ringgold. When they advanced toward Atlanta in May 1864, the town had been reduced in population to one family and one lady. Most of the buildings had been burned, but the depot, four stores of the downtown block, the Whitman house, Jones house and Evans house still stand.

While major development was stagnantuntil the opening of I-75 in 1960, today Ringgold’s location, climate, water resources, excellent schools and low taxes have brought the boomtown that started in 1847 back to life. 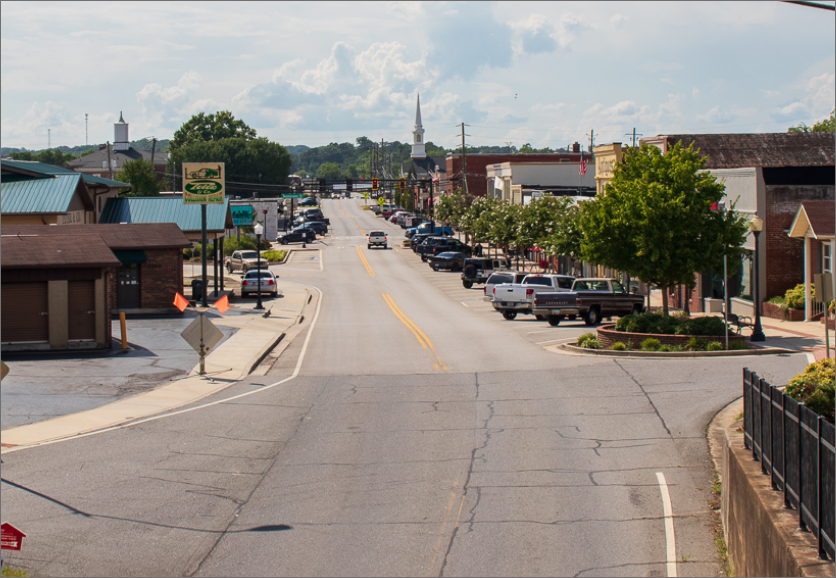 In 1895, Congress established the Chickamauga National Military Park to preserve the land and honor those who had fought and died there in the Civil War. Anticipating military needs to house thousands for training, Congress legislated in May 1896 that the Army could use all military parks with their vast acreage as training grounds. In 1898, Camp Thomas, named for General George H. Thomas, the “Rock of Chickamauga,” was created to meet the needs of the Spanish-American War.

In 1902, 810 acres were secured just north of the military park and construction began on Chickamauga Park (North Post). It included officers’ quarters, barracks and stables, parade grounds, hospital and support buildings. The architecture reflected the Classical Renaissance Revival style featured at the Columbia Exposition of 1892 and is best expressed in the officers’ quarters on Barnhardt Circle. President Theodore Roosevelt visited the cavalry post in 1903 while it was under construction.

The post was dedicated December 27, 1904 and named “Fort Oglethorpe” for the founder of the Georgia colony, James Oglethorpe. It was used as a camp of instruction and maneuvers for regular army and national guard troops in 1906, 1908 and 1910. It served as the home of the 3rd, 7th, 10th, 11th and 12th Cavalry prior to World War I.

On July 4, 1919, the 6th Cavalry was permanently assigned to Fort Oglethorpe and the post took on a more relaxed atmosphere. The beauty of the officers’ quarters, the proximity of the camp to the city of Chattanooga and the recreational activities held at the post made Fort Oglethorpe one of the premier assignments between the wars. Polo matches, parades, troop reviews, concerts and the officers’ club dances attracted local citizens and provided numerous opportunities for interaction between the military and civilian populations.

By 1941, the 6th Cavalry had changed from horse to mechanized vehicles. Parts of the battlefield were used as experimental proving grounds for tanks and other weapon systems. The “bantam cars” (Jeeps) were tested here in Chickamauga Creek and in area lakes. In 1942, the 6th Cavalry was transferred to South Carolina, taking with it 500 vehicles and no horses. The post then housed WAACs/WACs and, again, prison barracks for enemy aliens, including members of Rommel’s Afrika Korps. Of note, those prisoners and detainees who died while being held at Fort Oglethorpe during both wars are buried in a designated area in the National Cemetery in Chattanooga.

In 1946, after the end of World War II, the War Department determined that the army facility known as Fort Oglethorpe had become surplus property and instructed the War Assets Administration to sell the land and structures to the public. With a vision for the future, residents applied to the State of Georgia for incorporation. In 1949, the City of Fort Oglethorpe was established, the first city to be formed in Georgia in 25 years.

The City has recently purchased land to relocate the baseball fields out of the downtown area, restoring more of the parade grounds. The widening of U.S. 27 in the old downtown section of the town linked local traffic from Lafayette to the south and Chattanooga to the north. The creation of Battlefield Parkway, Georgia 2A, connected Fort Oglethorpe to the county seat of Ringgold and to Interstate 75. This increased traffic benefited the town.